Loretta Todd is an internationally recognized Canadian Director, who is bringing to life the acclaimed Eden Robinson novel, “Monkey Beach.” We had the opportunity to interview Loretta about this incredible new project.

Tell us about your project.

Monkey Beach is a feature film based on the iconic novel written by Eden Robinson. The book is in its 25th printing and is required reading in the Grade 12 curriculum in BC – and has been published in over 7 countries – including the US, Germany, France and the UK. It is taught in universities internationally and has a devoted following.

Monkey Beach is about Lisa Hill, a young native woman, confronted by her rebellious past, in possession of a mystical gift she doesn’t want, and driven to save her brother, whose death she has been foreseeing all her life and who now is lost at sea. The book and film are mostly set in and around Kitamaat Village. We are filming in Haisla territory – where the story was born and where it should live on screen.

What do you want people to take away from this film? 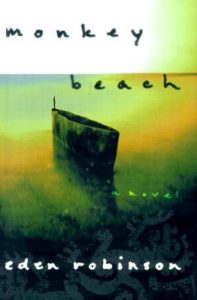 Monkey Beach takes us on an epic, heroic journey. Yet Lisa is not the usual hero – in fact I see her as a new version of the hero. I think that is why Lisa, the book and story resonate with some many people – across gender, generation, culture, life experience – we are all searching for the new heroic. We can experience story and draw from those stories and match it with our own power. And especially Indigenous women. And that’s ok. Indigenous women need heroes, too. We’ve seen and experienced really ugly stuff but we’ve endured and survived and always knew we were strong or how else could we have survived?

Monkey Beach holds many stories about the metaphysics of life and death, about the poetry and pain of coming to know one’s self, about the fragility of happiness and family. And there are ghosts and spirits and the supernatural co-existing with us in the real world.  Monkey Beach the novel is fierce yet tender, lyrical yet honest. I feel a great responsibility to make an amazing film – sensitive to the integrity of Eden Robinson’s story and storytelling yet with my unique cinematic vision. Monkey Beach the film will cross genre, push boundaries and reveal truths about us all.

The book and the script move through Lisa’s life in an elliptical journey – rather than a linear progression toward conflicts resolved. Instead it follows the rhythms of Indigenous storytelling – where narrative elements flow from associative meaning, layering moments and meaning rather than being driven by linear cause and effect. Her stories are like hard realities and deep truths merged with glimpses of dreams and pieces of memories. Yet, if there is an underlying cause and effect of Lisa’s story, it is that if Lisa avoids facing her supernatural abilities, she will live a diminished life, a half-life.

And of course, I want to see the power of Indigenous filmmaking.

Were there any challenges you had to overcome while creating this project?

I’m always ahead of the curve – and started developing this project when the mainstream Canadian feature film industry was slow to respond to an Indigenous woman director with a complex script with action, lots of VFX and stunts and underwater filming. I wouldn’t scale it to remove those challenges – I was determined to ensure they were part of the storytelling. And I wanted to film in Kitamaat and with Indigenous crew. But I have to say there were supporters from the beginning that I am grateful for, including Telefilm, Creative BC, Greenberg Fund and APTN.

How did the support from Creative BC help you create this film?

Creative BC support meant I could hold my head up and stay determined and focused and never give up.

What other BC creators inspire you? How so?

Profile of Odessa Shuquaya: Director of “Cedar Tree Of Life”