Carol Frank and Michael Katz, the husband and wife duo, started Tradewind Books in 1996 in London, England, where Michael was working as a school teacher. After moving to Canada the pair began publishing Canadian works, and for over 20 years along with their support of their team, have published some of Vancouver’s most notable and award winning books.

Tradewind Books is a small publishing house located in a studio office on Granville Island. With over 120 book nominations, recognitions and awards, Tradewind remains a pillar for the creative community within the province.

Recently a finalist for the Governor General’s Award for Pikiq (2017), as well as the winner for Canadian Children’s Book Centre Best Book of 2016 for The Riddlemaster (2016), Tradewind continues to be honoured and recognized for their dedication, passion, and commitment to the art of publication.

Michael’s passion in publications as well as his desire to share his knowledge is easily witnessed during one of his many Children’s Book Workshops at UBC. Originally a teacher at West Point Grey Academy and St. George’s School in Vancouver, Michael has also taught publishing courses at Langara College, Capilano University, and Simon Fraser University.

Carol, also a teacher at SFU, as well as UBC, gave up her academic career to become the Art Director at Tradewinds. Her creative work has allowed for Tradewind to become recognized internationally for their fine illustrations and innovative design. 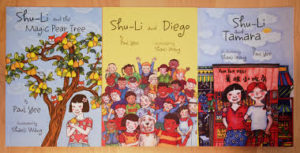